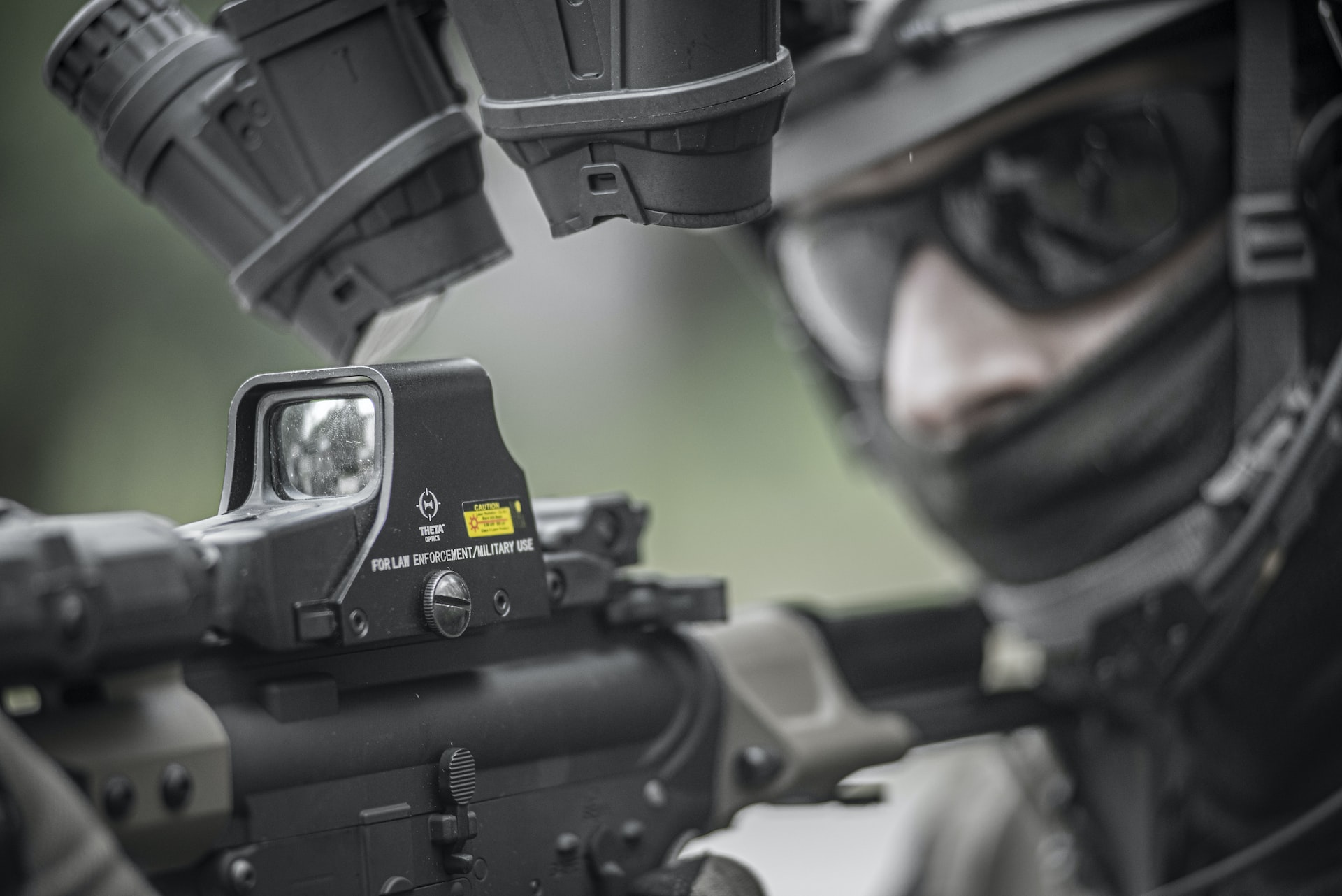 If you’re an avid watcher of television or you came across a firearm in real life, you likely understand that guns can be equipped with a sighting system.

Most firearms come with iron sights built into them; they enable accurate aim and precise shots. However, an exciting sighting system has been on a steady rise for the past few decades: red dot sights. Initially adopted by competitive shooters and the military, it broke into the world of new shooters to quickly become a favorite among them.

This begs the question: which one is more suited for you, traditional iron sights or red dot sights? We’ll explain their differences to help you decide, so read on!

Red dot optics differ from iron sights in many ways, but here are the key points you should keep in mind:

Most people stick with the iron sights that come with their firearms; casual handgun use doesn’t require special sighting devices (such as red dots). However, if you believe you’ll be in a situation where you’ll need a red dot, it’s good to keep in mind the differences we’ll explain below.

Sighting systems have a simple goal: to provide you with the ability to aim and shoot accurately. Let’s explain how red dot and iron sights work.

A red dot is a sighting device that projects an illuminated red dot onto a non-magnified lens to serve as an aim point. The red light is cast using a LED powered by an internal battery. Since it works based on a single focal point, aiming is as simple as looking through the lens and aligning the reticle with your target before pulling the trigger.

However, iron sights operate differently. Sight alignment and sight picture play an important role, as you have three points to focus on: the front sight, the rear right, and the target.

To land an accurate shot, they all have to be appropriately aligned. You must be mindful that the front sight post is centered horizontally and vertically with the rear sight notch or aperture to shoot accurately with your iron sights.

An experienced shooter will have no problem using iron sights; they’ve spent a lifetime in practice. However, iron sights undeniably follow a design that directly conflicts with natural human tendencies. In cases where situational awareness is necessary and you must remain focused on your target, they become inferior compared to optics. Here’s why:

First, you have three points to align: the front and rear sights and the target. Not only are humans incapable of clearly focusing on multiple points at once, but in stressful combat situations, its instinctual to look at the threat. Therefore, shifting focus from your sights to the target makes the aiming process much harder.

This shortfall is further exacerbated if you consider sight radius. If you compare a handgun to a rifle, you’ll notice that the distance between the sights differs. On handguns, the rear aperture or notch and front sight will be blurred out by your eyes if you focus on the target, as they’re very close to you; this will significantly impact your accuracy.

On the other hand, rifles manage this issue reasonably well. The front sight is far enough from your eyes to remain clear enough while you’re focusing on your target. Still, it’s difficult for beginners to get a good sight picture using iron sights rapidly.

Thankfully, optics work differently. Reflex sights (red dots) have a single focal point: the reticle. Compared to an iron sight, using a red dot sight is as simple as placing the reticle on your target and shooting.

And since you’re looking at a reflection of a LED light on a non-magnified lens, you don’t have to worry about eye relief — the image you’ll see will never be distorted or fuzzy.

When it comes to long-range applications, iron sights need you to be a top-notch shooter. But you can add a magnified optic to enlarge targets and get better shots with red dots. This aspect, which is exclusive to optics, also benefits the target identification process, as it’ll be easier to determine whether what you’re aiming at should be engaged.

Finally, if you’re inexperienced, you most likely aim with one eye closed and focus with your dominant eye while using iron sights. While this feeds the brain less visual data and allows you a clear picture of the sights, it’s dangerous in actual combat situations. You need as much information about your surroundings as possible.

Thankfully, you can use your red dot sight with both eyes open.

With iron sights, aligning the front sight post with the rear sight before shooting is time-consuming for beginners. Optics allow you to shoot quicker, as you only have to place the dot on your target and take your shot. That precious time spent shooting instead of aiming will make the difference in hostile situations where speed is everything.

This doesn’t apply to beginners only. Experts also perform better with red dots compared to iron sights. Thanks to their faster target acquisition, you don’t have to spend more time realigning the sights after each shot.

Your sighting system mustn’t fail when you need it most. In this aspect, iron sights and red dot sights differ in a few ways.

Iron sights are typically made out of iron or steel. Some manufacturers opt for polymers and aluminum, but these materials don’t offer the same durability as steel. Since they’re nothing more than metal posts mounted on your gun, there’s no chance for them to fail you. They can withstand the most severe environmental conditions and rigorous applications.

Reflex sights are made of different materials with varying durability and run on an internal battery. Generally, your red dot sight will last up to 20,000 hours — a little bit over two years. Still, reflex sights have several internal components that could fail, and their quality will differ from one manufacturer to another.

Their reliability depends on the said quality and how you use them. For example, if you’re a soldier put through harsh combat conditions, you’ll need a high-quality reflex sight that can withstand them. However, your sighting system doesn’t have to be military-grade if you’re a civilian with a gun for self-defense.

It’s worth mentioning that iron sights are less reliable in low-light conditions. While they’re illuminated by tritium or fiber optics, a reflex sight dot will always be more visible — it’s a reflection of a LED bulb. With iron sights, you might struggle with sight alignment in low visibility. All you have to do with a red dot optic is point the dot at your target and fire.

But rest assured that, with iron sights, there’s no chance of failure. Since no internal components are involved, and they’re made of durable materials, they’ll withstand any challenge you put them through.

Still, you can also co-witness both sighting systems. You get the advantages of both, and if your red dot fails, your iron sights will keep you in action. Make sure you mount them appropriately so as not to obscure your target!

Iron sights are small parts, and their weight varies depending on the firearm. For example, your concealed carry weighs an extra ounce because of them. Rifles’ iron sights can weigh up to six ounces.

In contrast, a red dot optic will weigh much more depending on size. Micro-sized ones can be anywhere from 3.5 to 4.5 ounces, while larger ones can weigh more than nine ounces.

Sighting devices’ weight is negligible unless you’re a rifleman with a large-sized, magnified red dot optic.

Red dots are a purchasable attachment, and their price will vary depending on the manufacturer and quality. While micro-sized optics intended for civilian use are affordable, remember that military-grade ones specialized for strenuous use and extreme conditions will break the bank! The bigger and higher quality a red dot sight is, the more expensive it’ll be.

On the other hand, most firearms already come with iron sights, and while you can buy a different one for yours, they’re much more affordable compared to red dots.

So, which one is better, red dots or iron sights? It depends.

Generally, red dots are for those who need both speed and shooting — competitive gamers or the military. Of course, they’ll also give you an advantage in low-light and fast-paced conditions, but they’re still an investment you have to make.

If you’re experienced, iron sights will serve you well in most scenarios. They’re also more affordable and extremely durable. But if you’re a beginner, remember that they have a more complex learning curve!

All in all, your skill is more important than what you use to acquire targets. So practice often!